Casey and I like to keep our traveling goal-oriented. Having an end game in mind keeps us motivated to get out of the apartment every weekend and explore. As satisfying as the actual experiences are, it’s nearly as fulfilling to mark each place on our wall map when we get home. So as hard as we’ve been working to get to each national park, we’ve been focusing just as much energy on visiting all of Korea’s eight professional baseball stadiums. Our most recent stadium was Daejeon’s Hanbat Baseball Stadium, home to the (currently and infamously) last place Hanwha Eagles.

Completed in 1963, Hanbat is one of Korea’s oldest stadiums. I visited Hanbat a few years ago during my first Korean sojourn and my experience did not foster high expectations for this time around. In 2010, the stadium was a small concrete monstrosity with little character that just happened to house the league’s worst team, not a recipe for a memorable experience. At that time, the stadium seated around 10,500 people and was, according to my extensive research on Wikipedia, referred to as the Ping-Pong Table, due to the tiny dimensions of it’s outfield. Things have changed, however, as recent renovations were completed in time for the 2013 season, increasing the size of the field and the seating capacity, along with a number of other changes. 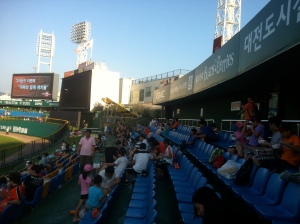 The result of all this is a drastically different ballpark. The exterior of Hanbat, like most of Korea’s stadiums, remains uninspiring. I assured Casey of the place’s drabness up until our first sight of the field. Compared to a few years ago, Hanbat is a remarkably fun stadium to visit. The addition of a modest upper-deck has increased seating by a few thousand, a new scoreboard provides between-inning entertainment, and the field is now a little less laughable thanks to some small tweaks. This is all great, but it’s the small touches that really impressed us this time around.

One of the best parts about Hanbat is the food. Most Korean stadiums are pretty spartan when it comes to concessions. A few convenient stores selling chips, beer, and some basic Korean snacks is all you usually get. Daejeon, however, offers a number of options beyond the usual fare. We even found Churros in a small nook behind home plate (Churros! in Korea!). The best part about the food is that the food stalls are open to the field, allowing fans to fuel up without missing any of the game. This openness really makes itself felt when you take the time to walk around the stadium. Minus about fifty yards behind home plate, you can walk the entire field comfortably without ever having to duck into an entry way and miss the action. The smallness that made Hanbat so miserable a few years ago has been transformed into an asset in this respect. 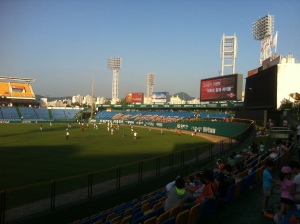 Another nice touch is the number of small, sponsored nooks and crannies integrated into Hanbat. A grassy area just beyond the center field wall now caters to families more inclined to sit on blankets than on plastic seats, a Bean Pole sponsored wilderness area is filled with tents and fold out chairs for a few lucky fans, and a series of differently styled couple seats abut the outfield bleachers. The result of all this is an experience that is very much like one you might find at the better, more family-oriented minor league teams in the U.S.

The game itself was pretty exciting. Although Hanwha is currently in last place, as they have been for most of the last five years, they pulled out a victory against the Nexen Heroes, allowing our own favorites, the Lotte Giants, to pick up a game in the standings. The fans, as are all Korean baseball fans, are infectiously enthusiastic. Hanwha’s cheerleaders and hype man were involved in every aspect of the game, playing the Eagles cheering section like an instrument. The only thing I didn’t enjoy were the Dodger’s hats and shirts on display everywhere. As a life-long San Francisco Giants fan, the flood of Dodger’s gear that the Ryu Hyun Jin – L.A.’s Korean ace – has brought about in Korea is nothing if not painful for me. Because Ryu suffered through years of being an Eagle, the vast majority of the jerseys on display bore his name. Though Hanbat ranks fairly high on our list of Korean baseball stadiums thanks to its recent renovations, I still wish that Ryu would have signed with anyone but L.A. and spared me the daily sight of Dodger blue.

Daejeon is easily accessible by KTX from Seoul or Busan and by bus from virtually anywhere in Korea you might be. From Daejeon Station hop on the #2 or #802 bus, both will drop you off in front of the sports complex. These same buses can be taken from the Daejeon Terminal Complex (대전복합터미널) to Hanbat, as well. From the intercity bus stop in the east of the city (유성시외버스정류소) take #119 bus or hop on subway line 1 to Jung-gu Office Station and then walk, both options will take about an hour.

This entry was posted in Baseball, Korea and tagged baseball, korea, stadium, travel. Bookmark the permalink.