Before we left on our trip to Taiwan, we did minimal research, but we did manage to track down and watch the Taipei episode of Anthony Bourdain’s “The Layover.” Much of the episode was normal Bourdain fare and we watched in jealousy as he was guided from one delicious snack to another (the names of which we jotted down in our handy little notebook for reference later). The one thing that really piqued our interest during the episode was a segment where he was forced to go indoor shrimp fishing in the middle of the night. Unsurprisingly, Bourdain seemed to hate it and took a rather pessimistic view of the sanitary credentials of the place. So naturally, the three of us all agreed that it was something that we had to do.

All of the shrimp fishing joints are clustered in the northern part of the city, in the general vicinity of the Shilin Night Market. Having also heard that Shilin was a must-do when in Taipei, we first headed there for some food and some drink. Like all the night markets, Shilin is bustling and full of interesting smells, just on a much, much bigger scale than the others. After filling up on street food and mangoes, we met up with a friend who has lived in Taiwan for a few years. Having never done it himself, he seemed a bit skeptical about our shrimping plans. 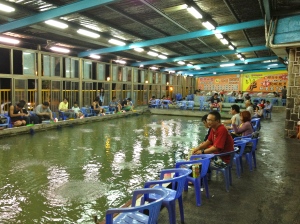 On the map, the shrimping pools seemed to be within walking distance of the subway station, but in this case the map lied. We ended up hopping in a cab and once our friend found the Mandarin word for shrimping, we were on our way. It was a good thing we cabbed it as we would have never found it on our own. I still don’t know where we were in relation to anything else. Not that we cared anyways, we were too focused on fishing for our dinner.

The shrimp pools were all located inside huge tents which lined one side of the street Having no idea what we were doing, we meandered inside what deemed to be the front entrance. The men at the front desk eagerly greeted us and, just as eagerly, accepted our 300 NT ($10) for an hour of shrimping. They gave us poles, trays, and as much bait as we wanted. We filled our trays up with tiny shrimp and bits of chicken liver and got to work. As much as I hoped the shrimp would turn out to be cannibals at heart, the chicken liver proved to be much more effective as bait. 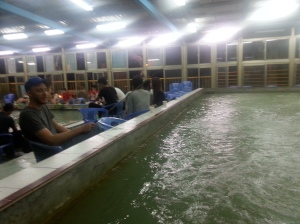 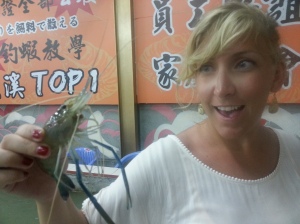 Setting up chairs around the end of one of the pools, we caught up with our friend, passed around a bottle of aboriginal millet wine we’d gotten earlier in the day, and did our best to catch some shrimp. Morgan proved to be the expert, catching five shrimp in total. Casey snagged two, while Josh and I both managed to save face and hook one each. Anthony Bourdain failed to catch any, so I consider our efforts a success. 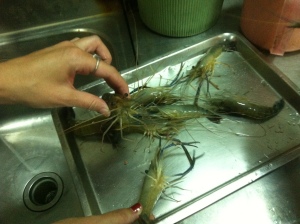 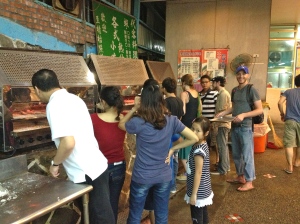 When our hour was up, we handed our poles in and set to work on our catch. First, Morgan and Casey washed the shrimp and plucked off all the legs. Next they passed them to Josh who skewered them on a wooden kebab. This doesn’t sound strange, but keep in mind the shrimp are still very alive at this point. Barbaric, maybe, a unique experience, absolutely (sorry shrimp!). Having gotten our catch ready to cook, we bathed them in salt and put them on the grill. Casey, as always, took on the title of grill master and made sure that the shrimp cooked properly. The nine beautifully cooked crustaceans that we ended up with were delicious, but at a total of around $40 between the four of us, they were also probably the most expensive shrimp we’d ever eaten. 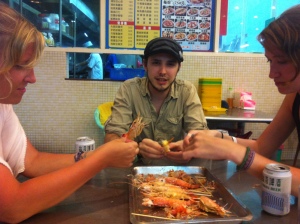 Despite our meager catch, we left very satisfied. Sitting around a murky pool with dozens of strangers attempting to catch shrimp was about as bizarre as you’d imagine it would be. With a little practice, it could even become a fairly cheap way to feast on some pretty tasty seafood. We saw one man with a literal mountain of shrimp slowly filling up a bucket at his side with shells. Unfortunately for us, the art of shrimping is not something you come to naturally. Regardless, it was an adventure. If you’re up for something out of the box, a few hours poolside at the shrimp tent is time well spent.

Like I said, I have no idea how we got there. If you want to be like us, I suggest taking the MRT to Shilin Station on the red line and hopping in a taxi. Showing the driver the picture of the storefront we have posted above should get you there. Further research, however, indicates that if you get off the subway at Jiantan Station (one stop before Shilin), you can catch bus #18, which should take you right past the shrimp tent. The address of our particular choice was No. 471, Section 2, Zhìshàn Rd., Shilin District. Good Luck!