Korean mountains have a funny way of teasing you. With all the stairs, lookout points, and ups and downs on the way to the peak, it’s easy to get fooled into thinking you’re in the homestretch. Casey and I learned this lesson early on in our Korean national park adventure. On our very first hike at Woraksan National Park, I kept reassuring Casey that there was only one “final push” before the peak only to be proven wrong about half a dozen times. I lost a little bit of credibility that day, but we did eventually reach the top.

That first hike really set the tone for our adventure through Korea’s twenty-one national parks. Though our quest has been fun, awe-inspiring, and fulfilling, it hasn’t been without its challenges. This recipe of adventure and difficulty has held true for nearly all of our trips, and even now as we truly are in the “final push” of our journey, it was no different at our fifteenth destination, Juwangsan National Park.

Juwangsan is arguably Korea’s most inaccessible national park. Located in Gyeongsangbuk-do, the park is about as isolated as you can get on the peninsula without being in North Korea. The only sizeable nearby city is Andong, and even that is an hour’s drive away. Getting there from the Seoul area is a bit of a hassle, but not impossible considering this is Korea, the land of efficient public transportation.

Casey and I arrived on a Saturday afternoon after a long, four and a half hour bus ride from Dong Seoul Bus Terminal. Conveniently, daily buses from Seoul run directly to Juwangsan. Inconveniently, the bus’s primary destination is Andong, meaning a series of stops in a number of tiny hamlets on the way to the national park. We were a bit unsure of the facilities at Juwangsan before we arrived. A number of blogs indicated that places to stay were few and far between and those that were available were overpriced, grungy minbaks. We were pleasantly surprised, however, as there were a number of new places to stay across the street from the tiny bus terminal, including a well-maintained campsite just down the road. We ended up opting for a room in a pension that included a bed, flat-screen TV, kitchen, and a balcony complete with tables and chairs for 50,000 won. The room was much nicer than the majority of love motels we’ve stayed at for the same price. So unless you’re going in the fall to see the leaves, you shouldn’t have any problem securing a place to stay. 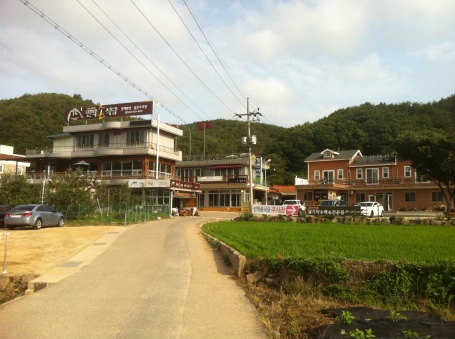 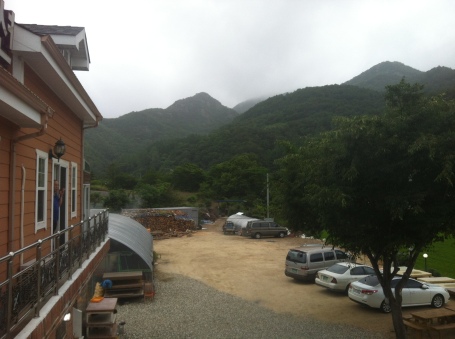 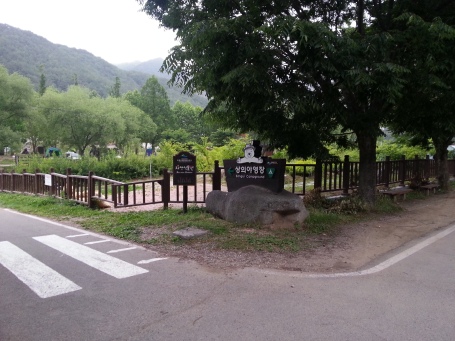 After some makgeolli and a few Korean pancakes (a must-eat dish, and one you’ll find at the base of virtually every mountain in Korea), Casey and I spent the evening on our balcony relaxing and enjoying the stunning view of the massive rock faces looming over the entrance to Juwangsan. 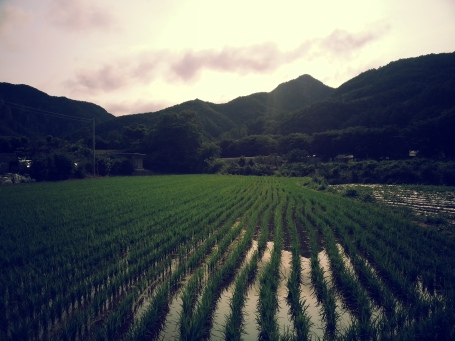 We woke up early the next day to start our hike. Like many other parks, the road into Juwangsan is lined with restaurants and stores. Casey and I stopped to pick up a bottle of homemade dongdongju, a regional variant of makgeolli, for the peak and were promptly given a series of free samples by a very kind woman working at the Healing Spoon, one of the first restaurants past the bus terminal. Two things of note here: 1) this was only the first in a long series of extremely kind people we met at Juwangsan, and 2) multiple bowls of makgeolli is an excellent way to start a hike at 8:00 in the morning. 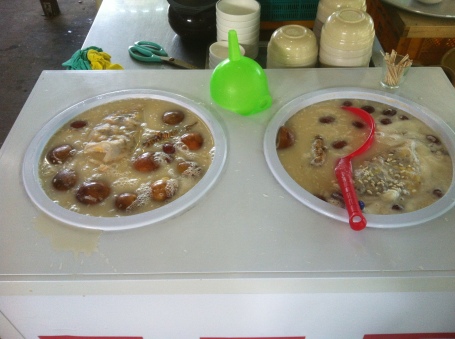 Just past the ticket booth (2800 won per adult), lies Daejeonsa, a fifth century temple currently under renovation. Following the road that wraps around the temple complex, we soon came to a fork in the road. Most visitors to Juwangsan head left here, along the path that offers quick and easy access to Jubong Valley, the true gem of this national park. Casey and I went right and headed to the peak of Juwangsan before continuing on and around in a loop that would lead us the back way through Jubong Valley. 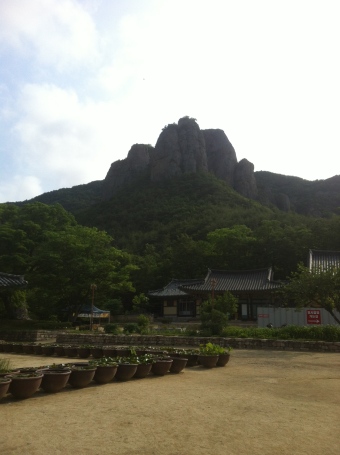 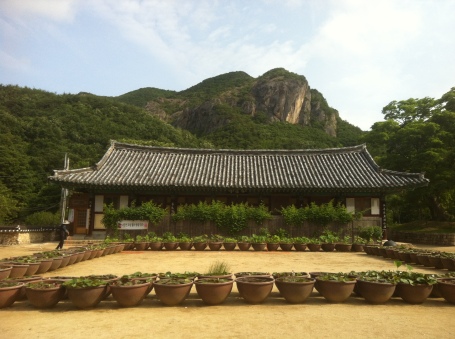 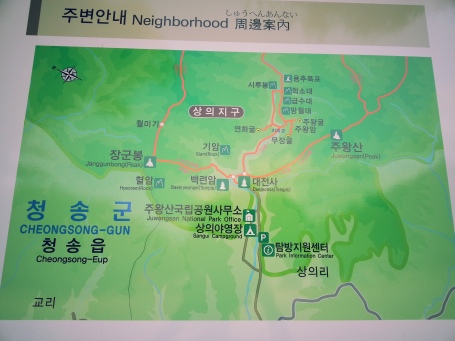 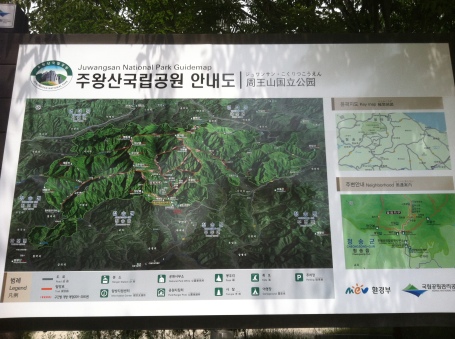 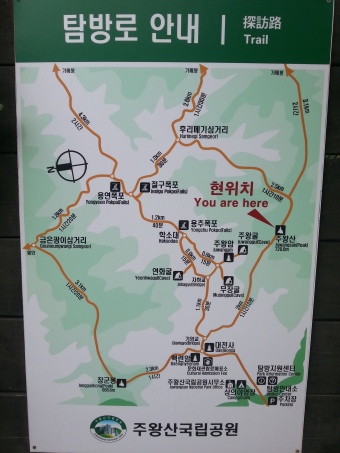 Map at the peak of Juwangsan

Hiking is like anything else, some days everything feels right and you feel wonderful, other days you question why you even got out of bed. This was one of the latter days. The peak of Juwangsan is only 720 meters high, making it one of the shorter mountains we’ve attempted in the past year and a half. Unfortunately for us, relatively short heights don’t always translate into easy hikes. Although there’s no explanation for it, we struggled to the top. Anyone experienced with Korean hiking could be expected to complete this trail relatively easily, yet we still struggled. After an annoyingly difficult hour and a half, we made it to the top and cracked open our bottle of makgeolli. 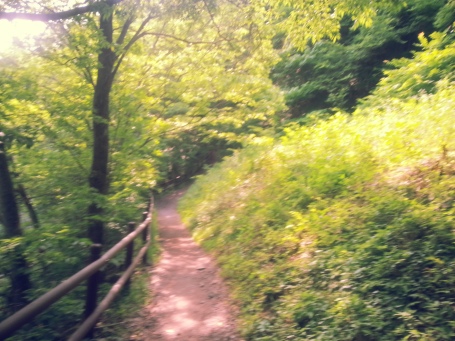 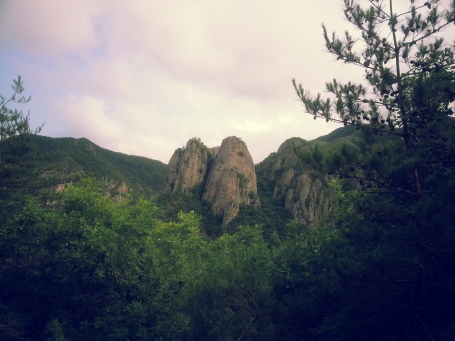 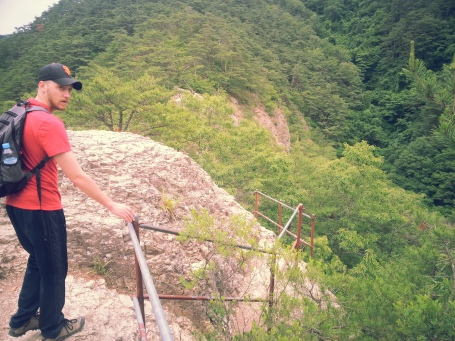 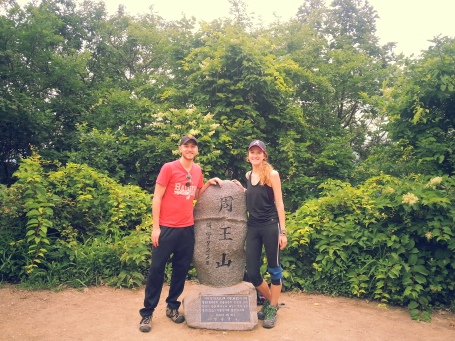 Though the peak was lined with trees that blocked any possibility of a view, it was quiet and peaceful. On the way to the top we encountered exactly four other hikers, making it possibly the most unpopulated hike we’ve ever been on in Korea. After snapping a few pictures and relaxing for a bit, we headed on to complete our loop. The northerly trail from Juwangsan was longer than the way up, but because it was nearly all downhill we were able to complete it quickly and with little difficulty. If you plan on doing the same hike, I suggest following in our footsteps and heading to Juwangsan first in order to avoid the added strain on your knees. On the way down to the valley we started running into more groups of hikers. Everyone was quick with a hello and we were given cucumbers and hard-boiled eggs by fellow hikers along the way. Maybe it was the relative isolation or just the surprise of seeing foreigners on the trail, but the brethren of hikers was strong at Juwangsan.

The final leg of the loop spit us out through Jubong Valley. Viewed from the top of the mountain, the valley is a series of rock faces that, while stunning, somehow pales in comparison to the effect of walking through them below. Jubong Valley is simply one of the most beautiful places either of us has visited in Korea, easily rivaling Seoraksan’s Ulsan Rock in both beauty and raw power. The path is a perfectly maintained wooden walkway between the rock walls that meanders above a clear stream. Though the numerous waterfalls, like most others in Korea, are less than impressive, the rest of the gorge more than makes up for it. Unsurprisingly, Jubong Valley is packed with sightseers and photo-seekers. 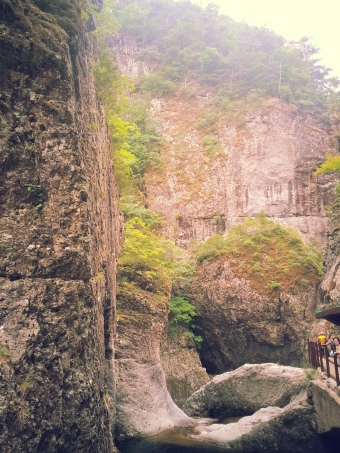 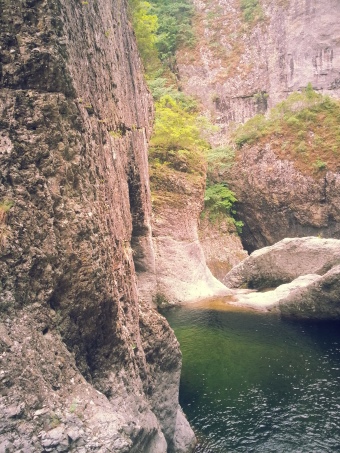 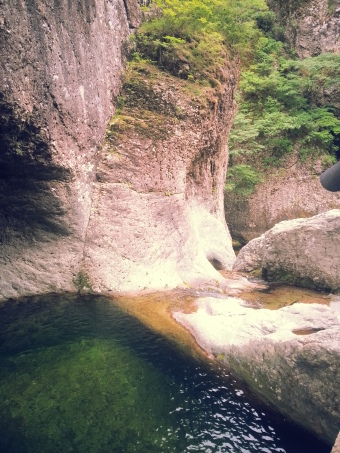 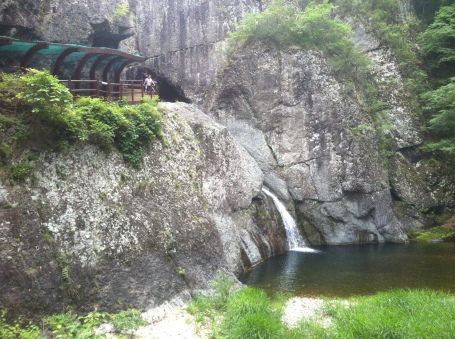 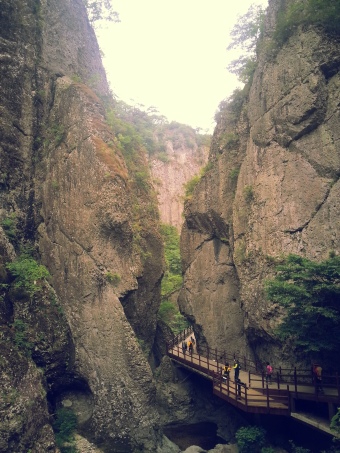 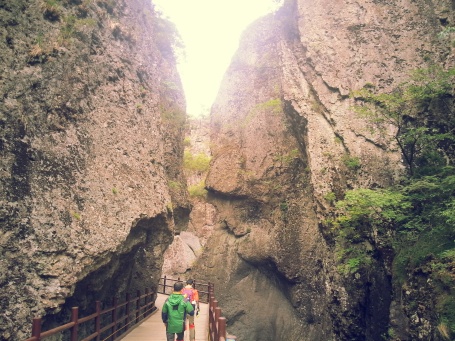 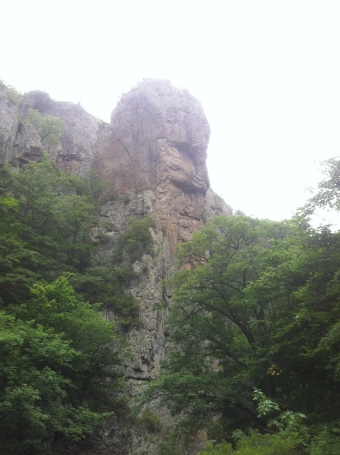 Reaching the southern end of the valley, we found ourselves once again at Daejeonsa. The entire loop took us around four hours to complete with generous breaks. After purchasing bus tickets back to Seoul through the confusing machine in the terminal, we headed back to our favorite makgeolli lady for some lunch. Juwangsan is well known for apples and we tried an apple bibimbap that proved to be delicious. After picking up a bottle of apple liquor, we boarded the bus for what proved to be a hellish trip home. Once again, all the stops between Juwangsan and Andong ate away at our Sunday afternoon. We tried to pass the time by watching a movie, but the traffic jams as we got closer to Seoul proved to be too much. Even our three-hour movie was over at least three hours too soon. This is a common problem with Sunday bus rides back to Korea’s capital and one we were mentally prepared for, but it was still miserable. 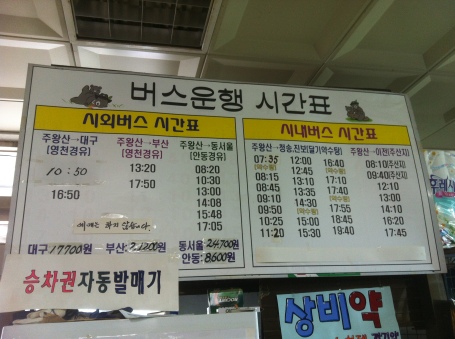 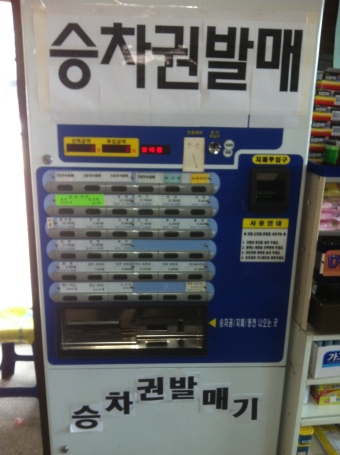 And so that is how it goes when you travel in Korea, or anywhere else really. You can find yourself in the middle of nowhere. You can be surrounded by natural beauty and the kindness of absolute strangers without a common language. You can share a unique experience with someone you love. Yet an easy hike can turn into a challenge because its simply not your day and you can find yourself on an eternal bus ride with a pounding headache and nothing to do. But for all that, the journey was worth it. Juwangsan is a special place that should not be missed because of its location. Make the effort. Take the trip. You will be rewarded. 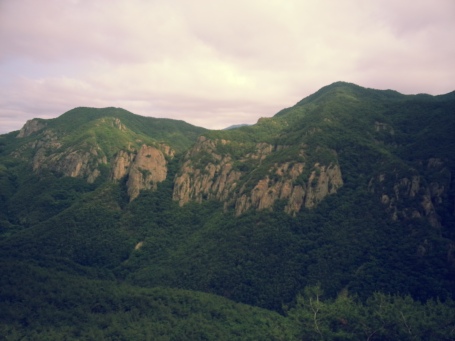 Despite the distance from Seoul, Juwangsan is relatively easy to get to compared to some other parks. Direct buses via Andong and a number of smaller towns leave from Dong Seoul Bus Terminal, outside Gangbyeon Station on Seoul’s green subway line, daily (6:30, 8:40, 10:20, 12:00, 15:10, 16:40). Juwangsan is the final stop and without traffic the ride should take around four and a half hours. Bus tickets can be purchased online at www.busterminal.or.kr (all Korean).